For a section of my Final brief there needs to be COLLABORATION, which is very EXCITING! :)

I luckily came across another student on my course Jason who wanted to have 2 puppets made and then animated to go into his end of year film called "Steampunk Mysteries-A Haunting At The Blindknight Manor". Looks to be an awesome piece and I can not wait to see it all put together! If you would like more details about his film here is a link to his blog, which he keeps really up to scratch with what he is doing (I don't know how he finds the time, the mans a machine!!!!!)

SO what am I doing!!!!! One of the puppets I had to make was of this crazy design from Jason a WEREWOLF MUMMY! so crazy I wanted to jump straight into it!

I made a construction plan of how to make this beast using a simple wired armature, below is my attempts at using silver solder which was a fantastic learning experience (even if I did burn my lip, HA!) I really do not think I would go back to epoxying K&S together! along with the armature I constructed the core for the head out of balsa wood and glued it onto the k&s with epoxy as seen below :)

Now there is a tiny bit of a jump here so I will do my best to explain it. I constructed the legs out of wire, K&S and balsa wood to shape the base of the feet. I then epoxied all four legs into the main armature equally distributing the balance.

Then I also added balsa wood to the tail to pad out the armature and give a solid light core for the animator to hold onto.
I used Milliput to cover the balsa head core to give it better shape with sanding before applying detail.

Next I wanted to experiment with some 2 part silicon mold that we had (usually used for silicon food molds) I used this on top of the two different claws I needed for the character which I unfortunately forgot to photograph, however they were a simple wire armature and I used sculpey firm to shape the claws.
While leaving them to set for a little while I went ahead and started sculpting the skull for the character on top of the Milliput. 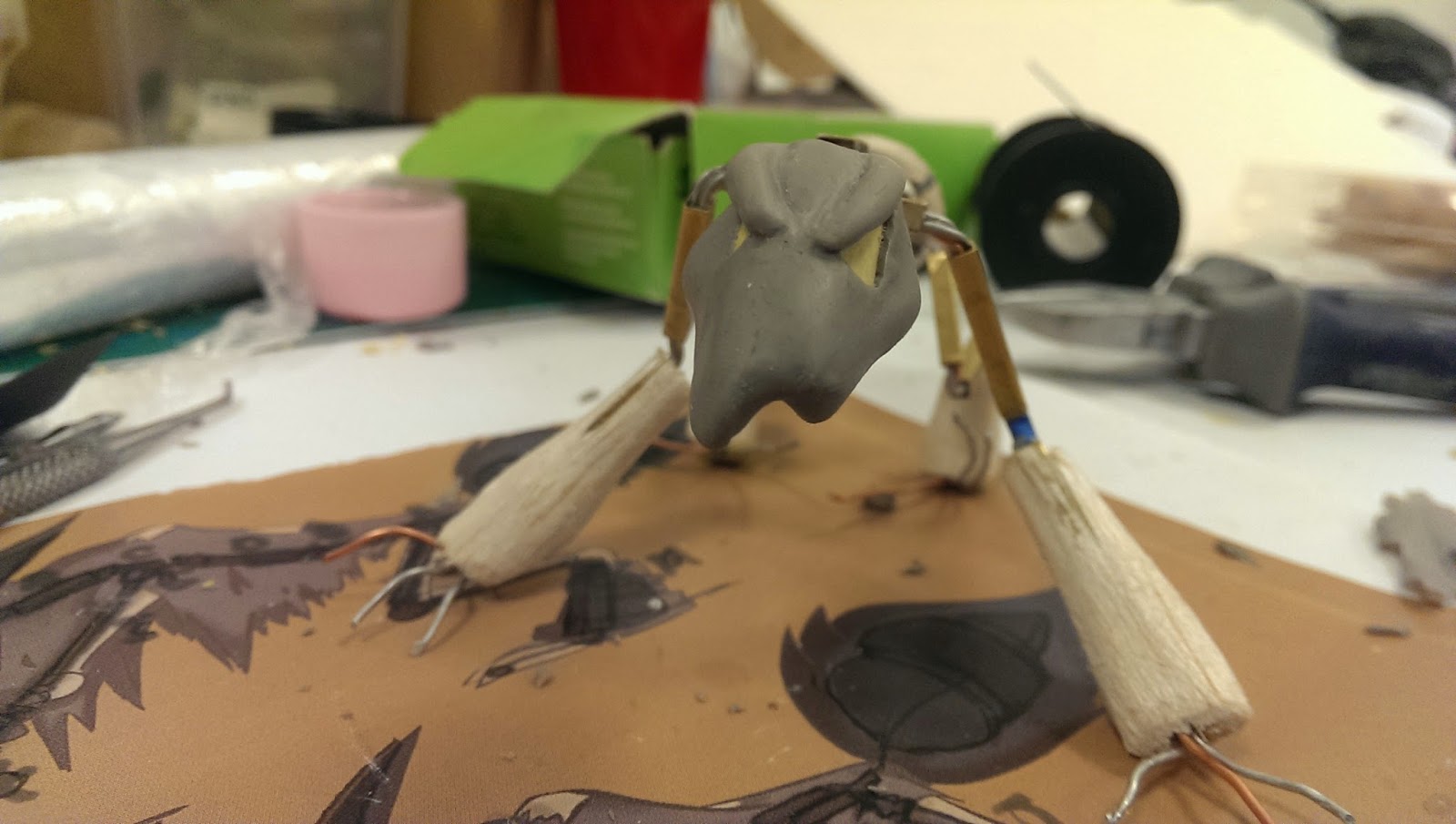 Unfortunately the 2 part silicon mold did not work out so well, it firstly was very stiff and then it was very difficult to get the resin into the mold so I ended up using normal liquid silicon mold rubber instead and they came out a lot better :)

I then used resin to pour into each mold to create twelve exact claws for the Character.

Next I tried again the 2 part silicon putty to create a mold for the ears of the chracter, I originally used mountboard and cut it into shape, stuck it to foam board and proceeded to create the mold. it was very successful and I was able to easily make two resin casts of the ears which I then trimmed and sanded.

Carrying on once all the claws had been cast I preceded to trim, sand, drill and epoxy them onto the character to create its fierce claws :D

Here is the Character at a good staged of the build giving a nice sense of what he will look like.

For the bones of the character I ended up using Millput on top of the K&S which when dried and sanded down with a dremel gave a nice effect.

I also added a little bit of padding to the tail just incase. 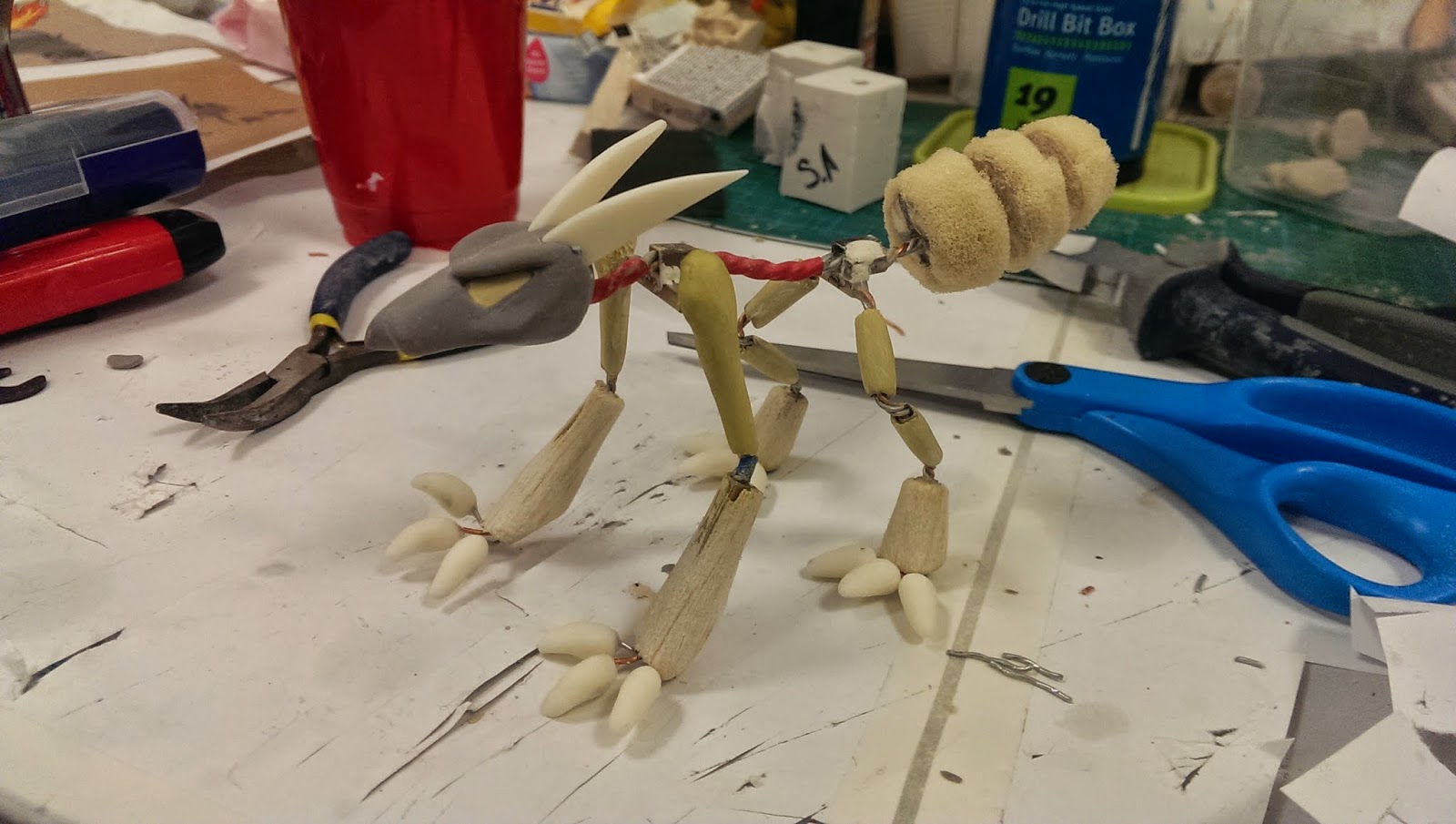 Once all was dry and construction was 90% done I began to paint the character using various shades of acrylic and dry brushing.

I again added padding to the balsa attaching it to the legs where cloth is to be sewn on and also the spine of the character.

LASTLY I added the fur to the tail of character which I made a pattern for, along with using a nice grey light weight torn fabric, sewn and glued to the legs. 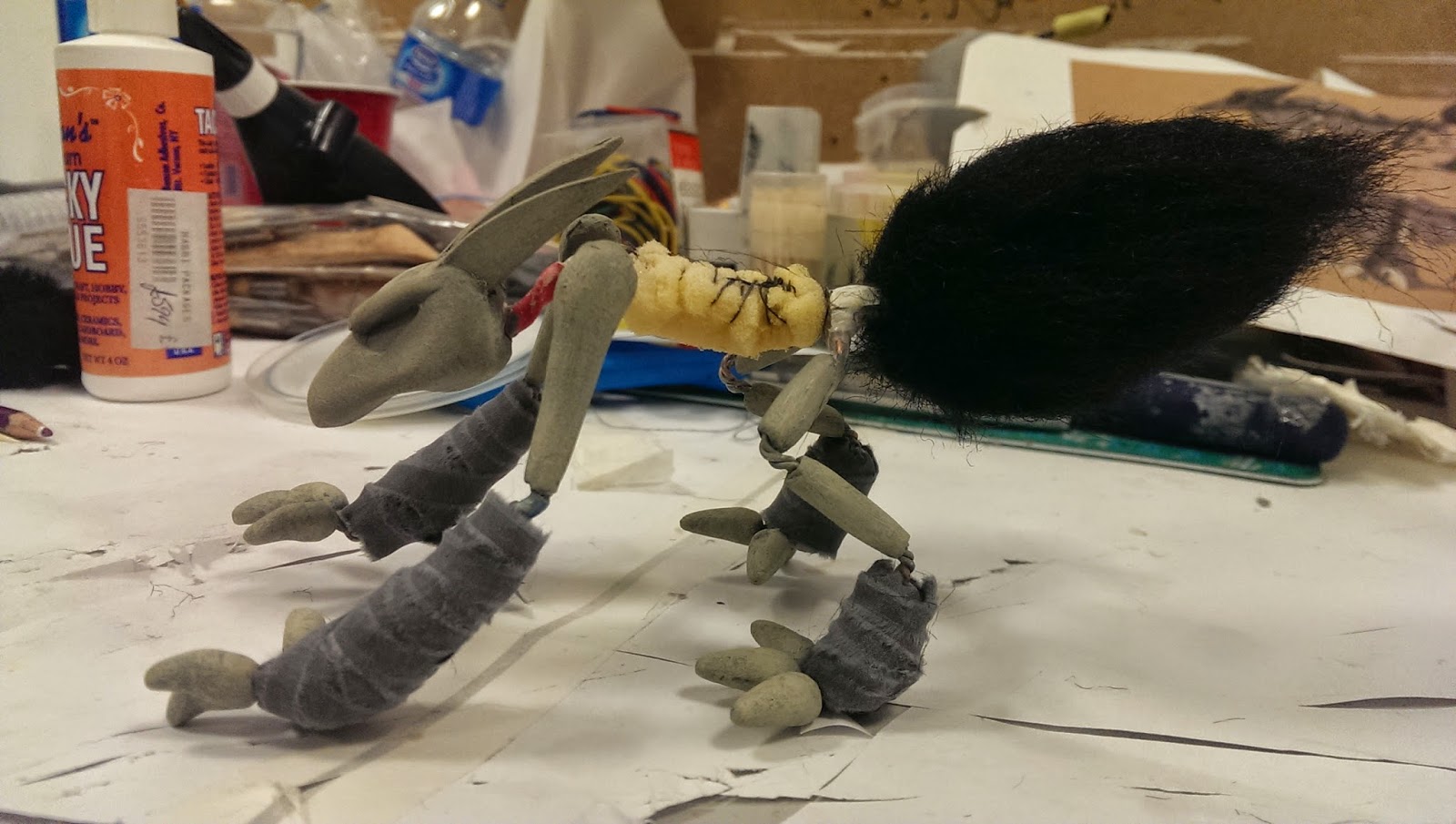 THATS ALL FOR TODAY FOLKS!

I will be doing another 2 posts for this project, one about the 2nd puppet and another on the final look of both characters!